Life In The Country - An Early Morning Cattle Drive... And Max

Hello and good morning!  No card to share with you today, but I've sure been doing LOTS of coloring and playing with my new Peachy Keen Stamps (see post below), and I'll have some projects to share with you very soon.  In the mean time, I thought I'd share some of what keeps us busy around here.  Living in the country is so awesome, and yes, it does have it's draw backs, BUT, when you can wake up to a sunrise like the one below, how on earth can you be unhappy?  I took this one a few days ago, and I have to say that sunrise was just breathtaking! 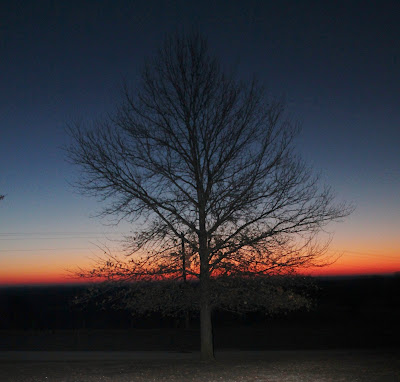 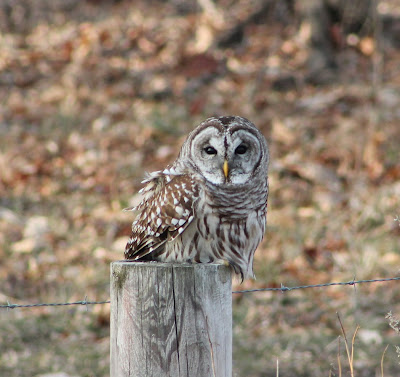 Allen took off to cut wood last week, and was gone all of 5 minutes before he came back for the camera.  It seems he spied this feathery fella close to where he was cleaning up brush, and he was holding his breath hoping that this guy would still be there when he returned with the camera.  Lucky for us, he was still there, because Al got some GREAT pictures!  Mom and dad have spied this guy in their yard during the late evening time.  We're all a bit nervous about our little house dogs being outside at night for too long.  It may not look like it, but this guy could be a threat to them.  Especially our little 3.5 lb. Oliver dog!  We'll just keep a watchful eye on old Mr. Owl AND our fur babies.
So, this morning, Al comes in and says I'm needed outside while they move cattle.  Seems they need a "human gate".  WHAT??!!!!!  LOL!!  It really isn't as bad as it sounds.  For the most part, when the cattle see you, they have no desire to come your way.   We just needed to move them through the gate on one side of the road, across the road and through the gate on the other side.  Sounds simple, right?  ;-) 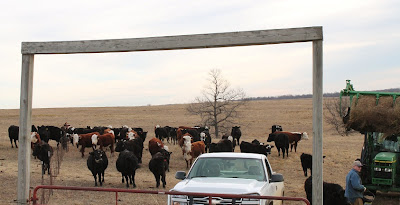 When I got to my designated spot in the truck, the girls had followed the truck to the gate, and they were ready.  Only problem.  The gate was closed.  Sooooo... 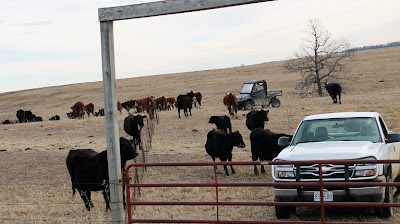 They decided to turn around and head back out to pasture.  See the cows headed BACK over the hill in the wrong direction?  That was NOT the plan! 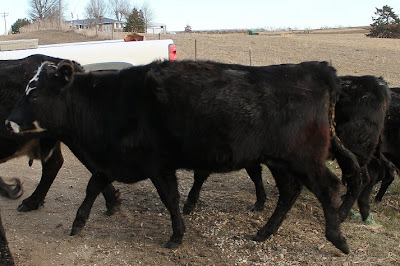 After another pass through the pasture with the feed truck and a load of hay, here they come through the gate. 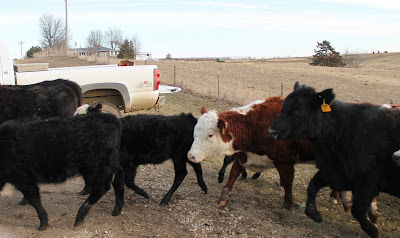 These ladies were in a hurry, and old number 7 decided to just jump the ditch.  Did you know that cows run fast, and jump rather well, too?  Human gate remains in tact, though. 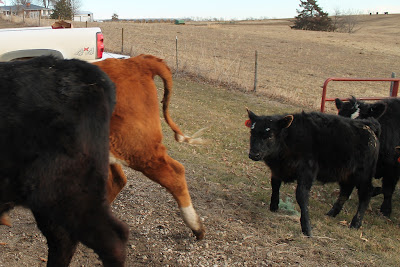 Now wait a minute.  This young one decided "I don't THINK so".   Just stopping with a herd coming up behind you is NOT a good idea.  Human gate still standing! ﻿ 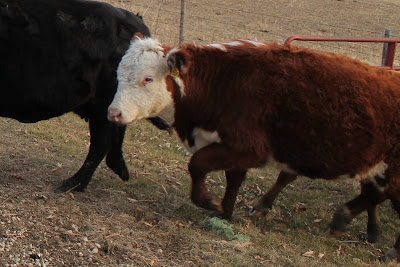 Some of the last ones to cross the road.  This one is a Herford, and I love seeing them on the farm again.  She and some of her Herford friends moved in here last Spring.  I say I love seeing them "again", because when I was a kid growing up here, we had ALL Herford cattle, but somewhere along the way, someone deemed that black Angus or  black white faced cattle were more desireable and marketable, SO we followed the trend and it's been Angus and black white face, or Black Baldies, as they're properly called ever since.  Until last Spring that is, when it was decided that since we have black Angus bulls we could get Herfords again, and the resulting calves will be... You guessed it!  Black Baldies that look like THIS.    There were a total of 108 cows that we moved this morning, and  I don't know if they're tired, but this old girl is ready for a nap!!  Being a human gate is more nerve wrecking than physically exhausting, but a nap still wouldn't hurt anything, would it?  I think not! 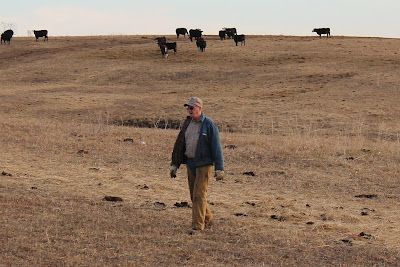 This is a shot of a slightly defeated Allen, because as you can see on the hill behind him, there were a few of the girls that decided today might not be the day they wanted to move to a new pasture.  After a quick trip back through with the feed truck, they were easily persuaded, and made the trip across the road, NOT through the gate, but through our yard, where they gathered anxiously at the farthest gate from the road to be let in.  Oh well!  It didn't go EXACTLY as planned, BUT they are all moved to their new pasture, where they are closer to the house.  That will make it easier to keep an eye on them and bring them up to the barn if needed when they start having their babies in a couple of months.
This afternnon, while the vet is here and Max's daddy is helping with the cattle,  the Max man will be visiting with Neenee, as he calls me.  He's walking everywhere, now, and I haven't seen him for a few days, so I'm sure needing a fix of sweet kisses from Max.  Here's some pictures we took of him last week.  I love his Ghostbusters shirt!  He wasn't so sure about the whole picture taking thing when we started, but... ﻿ 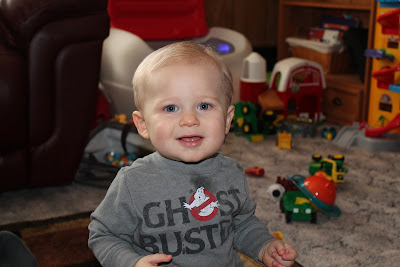 He warmed up right away.  He has the best smile, and the most beautiful blue eyes!  Yes, he keeps us busy, but he also makes us VERY happy!  As I said earlier in this post, how could you NOT be happy waking up to a sunrise like the one above, and seeing THIS sweet, smiling face nearly every day!  I'm telling ya that it just doesn't get much better than this!!!! 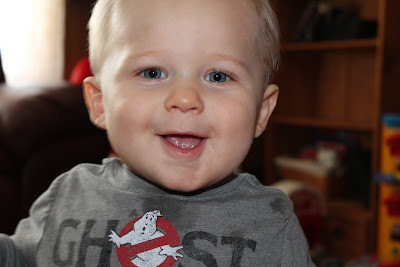 Thanks so much for stopping by today.  I hope that you're finding happiness and joy where ever in the world you are, and that there's beauty surrounding you in your life!  Have a blessed day and happy EVERYTHING!

Email ThisBlogThis!Share to TwitterShare to FacebookShare to Pinterest
Labels: Max, The farm, wildlife

What a sweet post. I love that sunrise and that owl is BEAUTIFUL. What a crazy and fun adventure with the cows. My grandpa used to be a dairy farmer and my mom remembers herding the cows and such. And of course Max is just ADORABLE and sweet as can be. Hugs- Glora

Your post just makes it so much easier to enjoy the "little things"!

I love it when you share glimpses of your wonderful life and that little Max sure does have the bluest eyes and adorable smile. I would love waking up to that everyday! Love you Lorie!

LOVE!!! :) I'm just smiling ear to ear at this gorgeous lil baby boy! I saw the word Max on my blog header (though I can barely even see straight at this hour, lol) and came running to get my cyber squeeze on! He's a gem!! I'm ROFL at the cow pics - somehow I just had a flash of Billy Crystal, ROFL!! hugs, sweet friend! x0x0

LOVE THESE PICS!! Love it there!! Just like going HOME! Look at that MAX! He's the cutest little guy ever!
:) HUGS and tons of Love! Kathy

I agree - what a fun and sweet post! I love how much you enjoy all the little things in life!!!

I enjoyed reading this post so much! My two year old loved seeing the cows!!

Oh, Lorie, you are so blessed! Your little Max is a doll!! Wish I could just pick him up and give him a hug and kiss those sweet cheeks! xoxo

Oh Lorie, thank you for sharing these glimpses of your life with us! I ♥ owls and love hearing the Great Horned that lives in the woods behind our neighbor's house, although I've never been lucky enough to see him. And the cow antics picture story was great! But the cherry on top is certainly your adorable Max! How can anyone resist that impish smile?! {big hug}